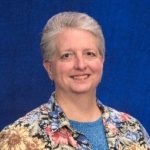 Ann Pinckney is Senior Director Department of Evangelization for the Diocese of Savannah, Georgia. She is a southern raised born and bred Catholic. Her parents who are both deceased had the most significance in her faith life and growth. She has five siblings and a niece and nephew.

It seems she has always been involved in Church life. Before her work with the diocese, she was a Catholic high school history teacher at St. Vincent’s Academy 1980-82. She also served as a lay volunteer in the Diocese of Pueblo, Colorado in their Volunteer In Diocesan Action (VIDA) program from 1982-1984.

Ministering in the Diocese of Savannah since 1984, she was first, Parish DRE at St. Anne, Columbus, Georgia 1984-1994. She began her work at the Diocesan Offices in Savannah 1994. First as the Director of Religious Education then to Director of Faith Formation and finally to the current position as Senior Director of Evangelization. Duties include evangelization efforts, RCIA and adult formation and supervising offices of Family Life, Youth and Young Adult Ministries including Campus Ministry, Hispanic Ministry, Black Catholic Ministry, and Catholic Charities. She has been involved with NCCL since 1994 and has served on several committees in that organization including the Board of Directors. She also belongs to NALM and NCEA. She has an MS Religious Education degree from Fordham University and a Certificate of Pastoral Studies from Loyola New Orleans.