Lent and the Melting Pot 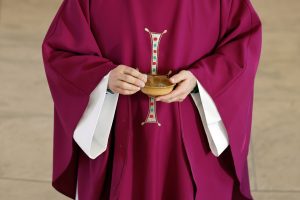 In a few short weeks, Lent will be starting. Thanks to its relatively late start, Lent might be more mild temperature-wise for many Catholics. But whatever the thermometer says, Lent is a time when many peoples’ hearts start churning, filled with questions about their relationship to faith, to the Church, and to their Lord.

Lent, then, provides an opportunity for us to think creatively about how we create access points as people do their Lenten ruminating: how can we provide “spaces” (both physical and virtual) for people whom the Holy Spirit leads to reflecting, questioning, and possibly deciding.

Even more, how do we do this in the particular melting pot that God has given us at this time in our Church’s life? Because, today, one of the biggest melting pots in contemporary America doesn’t involve getting people of different nationalities or languages to blend together. Rather, it’s the way different kinds of non-churchgoers tend to blend together these days.

There are so many categories of folks who are not regular churchgoers and, more and more, many of them seem to have the same characteristics. They are not, for example, hardcore atheists or even somewhat softer-core agnostics. They might have issues with organized religion. (That’s what the “nones” usually mean when they say they prefer “none of the above” when shown a list of denominations or faith.) They probably have issues within their families about religious practice because they stop going with Mom and Dad on Sundays . . . but perhaps they don’t know why. They drift in their religious ideas but still keep a quiver of religious ideas and practices.

By and large, a significant part of our population seems to be noncommitted believers. While that sounds like a contradiction, it makes sense for more and more people. Isn’t being committed the basic point of belief? So we look at this modern phenomenon arising from today’s “culture of choice” and simply scratch our heads.

But what is in question in all of this may not be the faith that many modern people have; it is more likely the form in which faith comes. If “Junior” stops going to church at the age of fifteen, has he lost faith? If “Nancy” stops going to church when she goes to college, has she lost faith? Or if someone has “not been coming to church” for a while, does that mean they have no faith? If people put their Bibles and prayer books aside, does that mean they have written off God in their lives?

You might suspect I’m describing that notorious breed that we call “believers but not belongers.” In a way I am. But more important to me is understanding that “non-belongers” covers a huge category of people today, all the way from our semi-rebellious teens, to young adults in relationships that make them feel awkward when they go to church, to people who describe themselves in general categories of “Catholic” or “Protestant” who mostly are maintaining the remnants of a legacy, and even to people who are genuine seekers in the sense that they are looking to belong to a church or religious community. 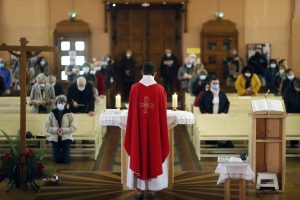 While the numbers of people who enter the Church through the RCIA has significantly diminished nationwide, our parishes still attract people to the catechumenal process, even people who are in a strict sense unevangelized and unbaptized. In 1995, for example, we had about 67,000 adult baptisms and 76,000 baptized adults enter the Church for a total of 143,000 adults entering the Church; but in 2020, these numbers were more like 36,000 adult baptisms, and 54,000 baptized adults entering the Church, for a total of 90,000. That’s a drop of 53,000! (I’m afraid these numbers have been going down steadily year by year, which leaves little for our evangelization efforts to brag about.)

So this amorphous group, putting genuine seekers together with all the various kinds of “non-belongers”— or perhaps better “non-participators”—might be likened to those groups that surrounded the Jewish communities in the Acts of the Apostles: God-fearers. While the word “fear” will not excite many modern people as a desirable quality of religion, the term refers to people who saw something in the Jewish God but did not feel they could become Jews themselves.

While all of this amorphous “melting pot” activity creates problems for Catholics trying to reach out—Who is it we are trying to invite?—it nevertheless creates opportunities for Catholics who have enough confidence in what our Church has to offer people to want to reach out and invite. In other words, we have a larger and larger sea in which Jesus has asked us to go fishing. And we have many more kinds of fish to try to catch for the Kingdom of God.

Rather than getting caught up in the potential maze of different kinds of people, some basic approaches can bear spiritual fruit with many kinds of people, particularly in this year’s Lenten season. Let me use the categories of the United States Conference of Catholic Bishops to present what these might be.

Modern life, from many factors including modern devices, keeps many eyes looking at screens rather than at others’ faces. But people still want to connect. The Covid-19 pandemic has shown just how ingrained the need to be with others is. Parishes have two distinct strategies in this area:

The next quality that the USCCB document Living as Missionary Disciples emphasizes that we can look at is “encounter”—yes, one of Pope Francis’ favorite words. It is one of his basic words inasmuch as nothing can happen without experiences of encounter! Encounter characterizes that quality of Catholic life in which we are open to the other, desiring to meet and desiring to listen to where they are on their journey in life.

Encounter can happen in a variety of ways, of course. But special events make encounter more pronounced. Certainly the opening parts of the Inquiry phase of the RCIA should emphasize a truly open and embracing encounter as people are invited to share their stories and where they feel God drawing them in life. But other opportunities abound in parish life if we have the imagination to make them encounters—and not just meetings. I suggest the way we gather parents together as religious education moves through the year. Similarly, how principals and teacher can give extra effort to encountering the parents of school-age children deserves exploration.

We all know young adults are a huge concern (and the cause of much handwringing). Rather than just fret about this group, parishes can try to gather them (perhaps joining with other parishes) to provide a forum where they can feel accepted, listened to, and invited to organize. Studies also show how the group called the iGeneration, raised with a proliferation of mobile devices, particularly are deprived of community and connection with others. Providing platforms to help this group simply socialize can be a profoundly evangelizing action. We have been able to feature Fr. Nicholas Lombardo’s book, 20s/30s Ministry: A Guide for Parishes, which is filled with great tips for getting into this ministry.

Well, we ask, what happens when we start encountering all these people? How do we deal with the messiness of their lives? At least potentially messy in terms of their formal relationship with the Church, or tangle of personal relationships, or transitions they might be undergoing in their lives.

Here’s where Pope Francis’ other word comes in: “Accompany.” At times we are called just to accompany people with a view of doing far more than “holding their hands.” To accompany someone is to have the privilege of being part of someone’s faith journey—a journey that might even be long-term. Sometimes it takes years before someone joins the RCIA, or someone can celebrate the Sacrament of Reconciliation, or people can get their marital state organized, or even for someone to explore going to Mass once again.

We have had a century of fairly organized American Catholicism; many of these assumptions float in our brains. Lists, charts, timelines, expectations, even threats. None of that works when we accompany people. The timeline is what the Spirit is doing in their lives. We have the privilege to be an agent the Spirit is using in the life of someone. But if we stand alongside people as faithful companions, giving people the space they need along with the support they need, then we can be part of the evangelizing and saving plan that God has for individuals. For this ministry we do not need trained theological minds so much as compassionate and accepting hearts.

One example of accompanying people is our program, Awakening Faith, a simple conversation-sharing format for people who are thinking about reconnecting to their Catholic faith.

The final category seems the most obvious one—are not all of us sent forth as disciples into the various situations in which we live? Though the most obvious, this dimension of discipleship seems the most difficult for many parishes and many individuals. From the statistics on new adult Catholics to the decline in participation in church, the need to reach out to others has grown with greater clarity year by year.

Nevertheless, parish activities in evangelization—specifically reaching those uninvolved in faith—has certainly not grown. From diminished parish staffs, including clergy, to diminished funds and to Covid- 19, the outward thrust of believers has been significantly tamed. We believers, however, cannot ignore this part of our life as disciples.

Most of this happens through peers—teens reaching other teens, young parents talking with other young parents, even seniors engaging with seniors. On all levels, if we can increase the conversation that believers have with others—even conversation over basic issues in life such as goals, stress, and frustrations—then the chance of people hearing Christ’s invitation grows dramatically higher. We see this interchange between believers and others in the Acts of the Apostles; why can it not happen today?

Living as we do in today’s “culture of choice” where so little religious or regulatory structures organize our lives, the melting pot of people living on the periphery of church participation will no disappear soon.

Yet every heart beats with the same hopes for greater justice, peace, security; for a fuller vision of hope; for an existence filled with life and love. Every soul yearns for forgiveness, reconciliation, and the chance to start over. Every person trapped by addictions or despair seeks freedom. All of this was the agenda of Jesus, sent by the Father to fulfill the vision of Isaiah the Prophet, as he told us when he began his ministry in his home town of Nazareth: “The Spirit of the Lord has anointed me to bring glad tidings to the poor . . . ” (Luke 4:18ff).

All people, whether they know it or not, long for the Kingdom, the very Kingdom Jesus entrusted to his followers. The more we see our role as bearers of the Kingdom, the more we fulfill our mission as followers of Jesus and as members of his Church, which is called to be the embodiment of hopes of the world.