From Sue Ann, a Paulist Prison Ministry volunteer in Tennessee 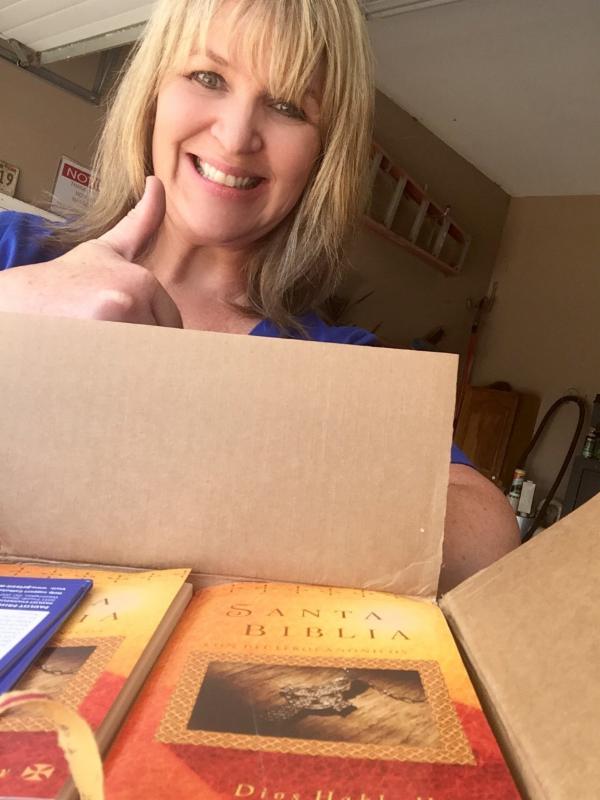 I am a recent convert to the faith and one of the books I read during my conversion process was “Camerado, I Give You My Hand” – a book about Fr. Dave Link, former Dean of Notre Dame Law School, now a priest devoted to prison ministry. The book planted a seed a couple of years ago, and after my conversion, that seed grew into a thought that prison ministry was something I could do. I found out there was a need for a volunteer at a nearby facility, and after one visit, I was hooked. I love every moment I spend at Northwest Correctional Complex in Tiptonville, TN, and have since the beginning! I found out that the men had been praying for a volunteer for over two years, and have no doubt that their prayers helped to bring me into the Church, for the conversion process was not easy for me. Our attendance (we have two services each week now) has almost doubled in the past year. The men tell me that it is because they have a volunteer who sincerely wants to be there, but in my heart I know that it is the grace of God in action, and nothing less.

I’ve only been involved in prison work for one year, but I can tell you with absolute certainty that the Catholic Church needs a greater presence in the prison system. My guys semi-jokingly call themselves a captive audience and each time I leave the facility, they promise to be there when I return. The incarcerated are a group who cannot, for obvious reasons, come to us. We have to go to them, and they long for us to be there!  Volunteers are treasured and valued, and inmates long to be treasured and valued and seen as persons with dignity.

I think many – if not most – people would be surprised if they took the time to meet the men and women who are in prison. When visiting a prison, Pope Francis said, “I think to myself, ‘I, too, could be here.’ That is, none of us can be sure that we would never commit a crime, something for which we’d be put in prison.” I feel very strongly that what he said is true.  When I am there, I feel as though I am among my peers. The men are persons who’ve made mistakes, who are struggling to find their way, who need the love, truth, mercy, compassion, and everything else that the Church and Christ have to offer; in other words, they are persons not unlike myself.

I was raised in a semi-religious Baptist family. My father committed suicide when I was twenty, and I lost a daughter in infancy when I was twenty-two. My childhood was dark and lonely, and I became bitter after those back-to-back losses.I was never an atheist, but I’m not sure that I could’ve been more lost even if I had been. I made some good choices, and many bad ones, too. By the time I made it to forty, I found myself praying for someone to come into my life who would write to me – who would want to write to me. I didn’t specify what I wanted the person to write to me about; I just longed for contact, and an outlet that would allow me to get some of what was trapped inside of me out. Six months later, a new physician was hired in the emergency department I was working in (I am a registered nurse). A Catholic convert, he challenged me to a debate on a hot-button social issue via email, and slowly – and with patience that seems incredible to me now – began to introduce the Catholic faith. He recommended that I read books by men like Chesterton and Sheed and Lewis and Kreeft, and I did. His example is another part of what inspired me to do the prison work. Without him, I would know nothing of Catholicism. I am not sure how we expect anyone to know what no one has ever taken the time to share with them.

I have written to many different organizations requesting help with materials. Yours is the first one who sent something! It can be difficult for someone like myself to find materials in bulk. Most places are set up to send materials to individual inmates. That is wonderful, and they provide an invaluable service, but we don’t wait for people on the outside to write and request materials from us. We go to them, or we invite them into our churches.  It is almost as though some think that prisoners should have to work harder or show more initiative when it comes to getting to know more about Christ and the Church. This is nonsense, of course. They are there, and they are waiting for someone to tell them what, oftentimes, no one has ever taken the time to tell them. Will it ’take’ with every single one of them? Well, no. From what I know of human nature, that doesn’t seem likely. But if it makes a difference to just one, then that is enough to make it all worthwhile. (Let me add, too, that I think it has the potential to make a difference to not just one, but to many!)

One last thing…I was thrilled to receive the Spanish bibles because there are a good many Hispanic inmates in the prison I go to, and the men tell me that they think they can get more of them to come to our services if we have more Spanish materials. Most are from Mexico and were raised in the Catholic Church. Many have fallen away from the Church, and many are pulled away by Protestant denominations who tell them that the Catholic Church isn’t authentically Christian. Even though many of these men were raised in the Church, most don’t know how to defend her. They are easily convinced that her teachings are wrong. These men are already Catholic, and they are slipping through our fingers! We need to be there for them, and we need materials that are easy for them to read and understand.

With love, prayers, and best wishes, and all of this in Christ, Sue Ann