It’s hard to think of a month busier than May, but also one fuller of wonderful celebrations, all flowing from the Risen life of Jesus!

We have quite a few things to share this month. I continue my reflections on how Catholics can think of sharing faith with others. This is part of a running series that will be released as a resource for parishes to use later this year. You can get a preview!

We have some interesting links that explore contemporary attitudes and culture. One looks at how some Protestant megachurches are trying to adopt some practices of Catholics. (A megachurch, by the way, is defined as “over 2,000 members.” We have, by that standard, lots of Catholic megachurches!) A second link comes from Mike Jordan Lasky, whose background is the social teachings of the church; he explains how he came to accept the language of “evangelization.”

In terms of culture, we have a link to a wonderful NY Times story on people joining the Catholic Church in the Brooklyn diocese; we need to read these stories to see how much we have to offer people today. And a final link shows the very interesting data that, among developed nations, more people pray in the United States than in others.

Please consider joining our webinar (two parts) on evangelization and social justice. It will bring us through the major slices of Catholic teaching since the notion of evangelization emerged with strength in 1974. Finally, I’m trying to stimulate our mission side by doing short videos on the Sunday Gospels—“The Gospel Sends Us Forth.” Watch the reflection for this week.

The How: Other Believers and Seekers

In this essay, we will explore what it means to reach out to seekers. Before we do this, however, we first we need to think about dialogue and how indispensable this is for engaging others.

The main instrument through which we deal with others as followers of Jesus is dialogue because it is fundamental to establishing relationships with others. There can be no sharing of Christ’s Good News without relationship. We can only share faith with people who have come to trust us and who are willing to open their hearts to us. Anything else borders on nagging or barraging people, which is not part of the vocabulary of Jesus.

Dialogue obviously has many contexts. We can dialogue with fellow parishioners, with Christians of other Churches, with people of other faiths, and also with people who do not espouse a faith. Whatever the context, dialogue has a specific shape for missionary disciples. “The Joy of the Gospel” says “the first step is personal dialogue, when the other person speaks and shares his or her joys, hopes and concerns for loved ones, or so many other heartfelt needs. (#128)”

Dialogue means standing alongside the other, not as the superior or director, but as someone equal in humanity. The exchange of human beings with each other, in honesty and courtesy, produces the environment in which people can share with each other. Only from this platform of sharing can people become open to each other’s hearts and potentially open to another’s perspective or commitment. Dialogue doesn’t mean forcing my opinion on another or talking someone under the table until she just gives up. Dialogue means trusting in the human bonding that can exist between all people, and letting God use that to advance us toward the fullness of life and love, which is the Kingdom.

How are they connected?

If your ministry is evangelization or social justice, explore how these essential ministries of the Church give energy to each other.

Join Fr. Frank DeSiano, president of Paulist Evangelization Ministries, to explore some of the key notions and documents behind these ministries today. Grow in your fluency to connect “Caritas” with “confession” for a fuller expression of Catholic life.

This month Fr. Kenneth Boyack, CSP, PEM Vice President, is celebrating the 40th Anniversary of his ordination to the priesthood. We would like to thank Fr. Boyack for his years of service to our ministry and the Paulist community.

Why Evangelical megachurches are embracing (some) Catholic traditions

I grew up in Colorado Springs, Colo., a Catholic girl in the evangelical New Jerusalem. In addition to Focus on the Family, Colorado Springs is home to more than 100 evangelical ministries. I spent my adolescence defending myself against evangelicals who did not believe I was saved or who argued that liturgy and ritual were dead because they were formulaic or routine.

So I was surprised to learn that New Life Church, a nondenominational, charismatic evangelical megachurch in Colorado Springs, with more than 10,000 members, recently embraced more traditional liturgies as well as social justice work without evangelization. New Life now recites the Nicene Creed, which it uses as its statement of faith, offers Communion at most of its locations on Sunday mornings, teaches its members about the liturgical calendar and has a home for unwed mothers experiencing homelessness called Mary’s House—as in Mary, the Mother of God.

New Life Downtown now concludes its Sunday service with a beautiful a capella rendition of an Anglican Doxology, a hymn of praise to the Trinity. Doxologies are found in eucharistic prayers and Catholic devotions like novenas and the rosary, time out of mind, but when was the last time you heard a doxology sung in a Roman Catholic church? In practice, many Roman Catholic churches have become increasingly low church.

The Gospel Sends Us Forth 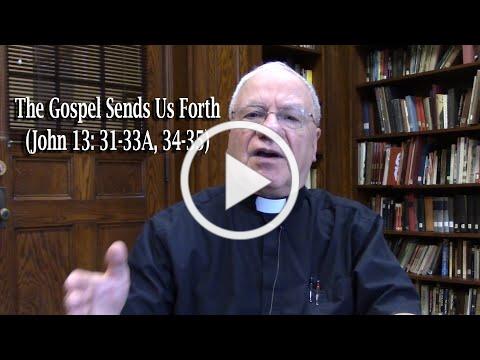 How I learned to stop worrying and love the word ‘evangelization’

“Hi. Um, God’s just telling me that you’re on his mind and he just wants to take you and he just wants to love on you and he has special plans for you in your life. And he just wants you to be able to follow him with your whole heart,” a young girl holding a Christian pamphlet tells a 20-something stranger in a bowling alley in one of the most uncomfortable scenes in the 2006 documentary “Jesus Camp.” The stranger graciously takes the pamphlet and thanks the girl.

I’ve only seen the movie once, about a dozen years ago, but that scene is burned into my memory. And it has often come to mind since then when I’ve heard the word “evangelization,” which has been sort of a problem, because I have spent my entire career working for Catholic institutions and colleagues in the field say the word all the time.

Evangelization: It sounds, well, evangelical to my Northeast Catholic ears. It sounds not-like-us. Catholics like me show up at Mass, even get involved in ministry activities, but we certainly don’t talk about it with outsiders. We’re definitely not doing that bowling alley stuff.

I’m not sure I’ll ever be totally comfortable with the word, but over the past few years, I have learned to stop worrying and actually embrace what I think it means, even if I still get the heebie-jeebies a little when I say it. Here are three points about what evangelization is not that have helped bring me around.

‘Spiritually Speaking, I am Free’

Catherine Chen was sitting in a pew at St. John Vianney Roman Catholic Church in Flushing, Queens, practicing. It was mid-April and she had just completed a run-through of what to do when the priest pours the Holy Water on her head later in the month. Fifty or so other Chinese catechumens — people who are joining the Catholic faith — accompanied by their sponsors, sat in the pews around her, listening to the instructions delivered from the altar.

This was their only rehearsal for the Easter Vigil.

Across the country each year, more than 30,000 people officially join the Catholic Church on Easter Eve — a tradition that dates back to the early days of the church — by participating in the sacraments of initiation: baptism, holy communion and confirmation.

Of the 500 or so converting in New York last weekend, about a third were Chinese immigrants, some of whom are seeking asylum based on religious persecution in China. Most of the Chinese immigrants live in Brooklyn and Queens, and they are having a transformative effect on local Catholic churches.

With high levels of prayer, U.S. is an outlier among wealthy nations

This May 2 is the National Day of Prayer in the United States, a day Congress set aside in 1952 for Americans to turn “to God in prayer and meditation at churches, in groups and as individuals.” But many Americans pray every day – not just on the Day of Prayer. Indeed, out of 102 countries examined for frequency of prayer by Pew Research Center, the U.S. is unique in that it has both a high level of wealth ($56,000 per-capita gross domestic product in 2015) and a high level of daily prayer among its population (55% according to the 2014 U.S. Religious Landscape Study).

In every other wealthy country surveyed – that is, those with a per-capita GDP over $30,000 – fewer than 40% of adults say they pray every day. For example, in Japan, where per-capita GDP is about $38,000, roughly a third (33%) pray daily. In Norway, where per-capita GDP is about $68,000, fewer than one-in-five adults (18%) do. (It’s worth noting that the surveys did not include wealthy countries in the Arabian Peninsula, such as Qatar and the United Arab Emirates, which might be expected to have high levels of prayer.)