This series presents directions to stimulate the thinking of pastoral leaders, helping them focus on the important ministry of inviting. Parishes may, to a greater or lesser extent, greet and welcome. But few parishes consciously invite–and this at a time when participation in church is falling across all the religious spectrum.

Clearly one of the largest blocks of active Catholics in parish life is that composed of seniors. These would be all people born before 1946, the year that designates the start of the Baby Boomer generations. This group would include those born in the early part of the twentieth century, including those who belong to the “greatest generation”-old enough to have fought in, or lived through, World War II.

This is a group whose participation parishes assume. They are the group, educated well before the Second Vatican Council, where church attendance was very high. (Reception of Holy Communion, though, was never as high as those attending Mass.) This generation mostly grew up in Catholic enclaves, in small towns or in urban districts, attending Catholics schools at a time when Catholic identity meant as much a social identity as a religious one. In Catholic schools, people in this cohort accepted the discipline of thousands of religious sisters and educated in religion through the little blue book called the Baltimore Catechism. Likewise, this generation received the ministrations of a swelling number of priests; rectories from that time have rooms for four or five priests. Highways had not yet been built which would cause this Catholic density to spread out and dilute, in the newly built suburbs.

Nevertheless this group, aged seventy and higher, presents distinct pastoral issues for a parish that wants to be an inviting community. This group faces important religious questions, all the way from health, through deaths of loved ones, through the birth of grand- and great-grandchildren, to the increasing likelihood of death sometime within a decade or so. In addition, people in this group, which had the strongest social identity with the Church, are the ones to feel most alienated if they are not active in the Church.

Here are some points to think about when trying to invite seniors. 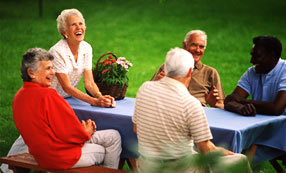 Many parishes now have seniors as the major proportion of their regular attendees. Statistics show that this older group attends Mass at two, or even three, times the ratio of other cohorts. Nevertheless, it is obvious that this is a diminishing richness for the parish; the numbers, and intensity, that this age group is contributing to the Church is limited by time, illness, and energy.

Yet there is still a great harvest for the Kingdom to be reaped by consistent commitment to seniors in our parishes. As much as “the great generation” has given to both Church and country, their lives will be even richer with more opportunities to give and to share in their twilight years.