102,134: The Lowest Number of Adults Becoming Catholic in the United States in 20 Years

After celebrating Mass one Sunday in 2018 I talked with a man who told me he became a Catholic through the RCIA during the Easter Vigil in 2017. His face gleamed with delight as he shared how much he had grown in his faith since becoming a Catholic. He said he especially loved the Eucharist and was happy that he, his wife, and three children are now a Catholic family.

When the 2018 edition of The Official Catholic Directory arrived, I was eager to see the number of “Adult Baptisms” listed and the number of adults “Received into Full Communion.” The Directory records 41,212 Adult Baptisms as the 2018 U.S. Grand Total and 60,922 as the U.S. Grand Total for adults Received into Full Communion. Adding these two categories equals 102,134, the total number of adults who became Catholic.

The Official Catholic Directory for 2018 identifies 17,416 total parishes in the United States, which provides the basis for determining that each parish, on average, welcomed 6 new Catholics as members of their parishes. The Directory also records 71,417,568 as the 2018 Grand Total of Catholics in the United States. This number enables us to calculate that each Catholic registered in a parish invited and welcomed 0.00143 individuals who were identified as new Catholics in 2018.

The number 102,134 reveals both good news and sad news. The good news is that over 100,000 individuals have come to know the risen Christ in a personal, transformative way, and made a public commitment to follow Jesus as his disciples in the Catholic Church. The sad news is that the number 102,134 is the lowest number of adults who became Catholic in 20 years. The graph below gives the details.

The data from The Official Catholic Directory reveal that within the past 20 years the largest number of new adult Catholics recorded is 178,533 in 2001. The lowest number recorded is in 102,134 in 2018. The decline in the number of adults becoming Catholic from 2001 to 2018 is 43 percent.

This 43 percent decline can be a wake-up call from Christ who gave all Christians the “great commission” in Matthew 28:19-20: “Go, therefore, and make disciples of all nations, baptizing them in the name of the Father, and of the Son, and of the holy Spirit, teaching them to observe all that I have commanded you. And behold, I am with you always, until the end of the age.”

One Primary Reason for the Decline in New Adult Catholics: Evangelizing is Not a Priority

To what can we attribute the 43 percent decline in the number of adults becoming Catholic in the past 20 years? Charles Zech and the other authors of Catholic Parishes in the 21st Century highlight in the graph below the priorities that Catholics give to the various elements of parish life. “Spreading the Gospel and evangelizing” are the second lowest priority at 21 percent, with only “Vision provided by parish leaders” listed as the lowest priority at 12 percent. 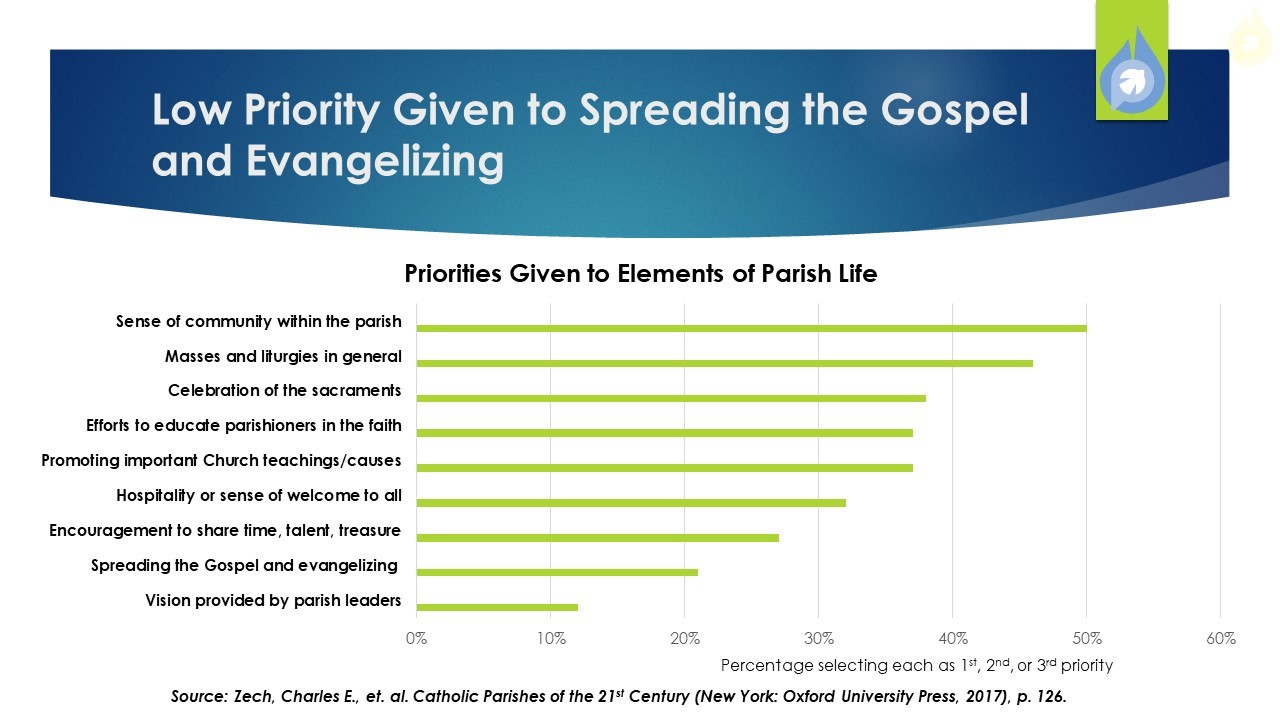 The top five priorities in this graph all focus on the inner life of the parish: ministering to those already in the pews. These priorities include instilling a sense of community within the parish, focusing on Masses and other liturgies, celebrating the sacraments, educating parishioners in the faith, and promoting important Church teaching and causes. While these efforts are essential to help Catholic grow in holiness, none of these first five priorities has anything to do directly with outreach to adults who are not active in any church and may be open to becoming a Catholic. Generally, we spend our time, talent, and treasure striving to achieve our priorities. Based on this data, inviting and welcoming adults to come to know Christ and become a Catholic is a low priority and the declining numbers of new Catholics recorded in The Official Catholic Directory shows the results of this mindset.

Since much of this data was collected, we’ve been confronted anew by the sexual abuse crisis/scandal, which makes many Catholics even less enthusiastic about evangelizing. But the darkness of this crisis hopefully motivates us to focus on the liberating light of Christ and the urgency to witness to and proclaim the Gospel as a top priority for all Catholics. 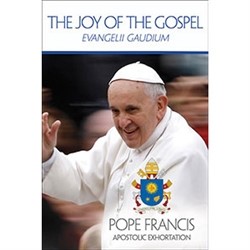 Focusing on the decline in the numbers of adults becoming Catholic in the past 20 years could make one pessimistic and cynical. Inspired by the Holy Spirit, Pope Francis identifies a clear strategy to increase the number of adults becoming Catholic in the United States, as well as throughout the world: every Catholic is a missionary disciple. The Holy Father writes in paragraph 101 of The Joy of the Gospel: “Every Christian is a missionary to the extent that he or she has encountered the love of God in Christ Jesus: we no longer say that we are “disciples” and “missionaries”, but rather that we are always “missionary disciples”.

In paragraph 24 of this same apostolic exhortation, Pope Francis writes about the urgency of parishes becoming a community of missionary disciples. “The Church which ‘goes forth’ is a community of missionary disciples who take the first step, who are involved and supportive, who bear fruit and rejoice. An evangelizing community knows that the Lord has taken the initiative, he has loved us first (cf. 1 Jn 4:19), and therefore we can move forward, boldly take the initiative, go out to others, seek those who have fallen away, stand at the crossroads and welcome the outcast.”

Becoming missionary disciples can change our priorities and increase the urgency to invite and welcome adults to find new meaning in their lives through following Christ as a Catholic. As we embrace this new teaching from Pope Francis, as difficult and challenging as it is, perhaps we will see an increase in the number of “Adult Baptisms” and the number of adults “Received into Full Communion” in The Official Catholic Directory when looking at the period of the next 20 years: 2019-2039. This turn-around is not that difficult to achieve. To dream a little, if each parish in the United States would have invited and welcomed just one more new Catholic, we would have raised the total of new Catholics in 2018 to 119,550, and if each parish would have welcomed just two more new Catholics, the total would be 136,966. The Catholic virtue of hope springs eternal!