Let’s all get involved in a nation-wide way to implement the New Evangelization! Let’s all participate in the V Encuentro! 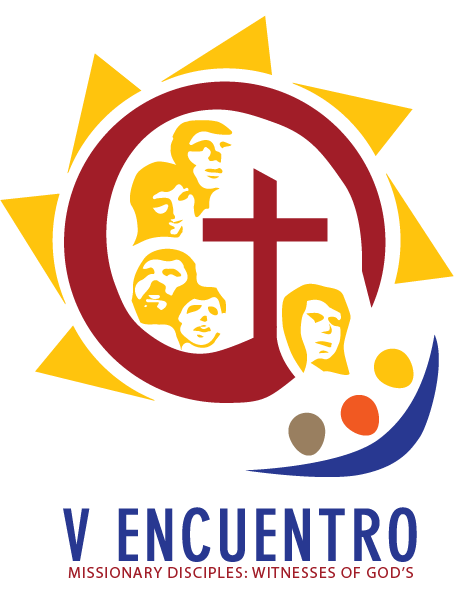 As the Secretariat on Cultural Diversity in the Church of the United States Conference of Catholic Bishops states:
The V Encuentro is a four-year process of ecclesial reflection and evangelization that invites all Catholics in the United States to intense missionary activity, consultation, leadership development, and the identification of best ministerial practices in the spirit of the New Evangelization.
Notice the inclusion “all Catholics!” The very first objective of the V Encuentro is to “call all Catholics in the United States to become authentic and joyful missionary disciples that give witness to God’s love with a prophetic voice in a culturally diverse Church.” The V Encuentro is all embracing! It is for all of us, Hispanics and non-Hispanics alike!
Its call echoes that of our Holy Father Pope Francis, who, in the first sentences of his landmark Apostolic Exhortation The Joy of the Gospel, exclaims: “The Joy of the Gospel fills the hearts and lives of all who encounter Jesus. Those who accept his offer of salvation are set free from sin, sorrow, inner emptiness, and loneliness…I wish to encourage the Christian faithful to embark upon a new chapter of evangelization marked by this joy, while pointing out new paths for the Church’s journey in years to come.”
And notice the word “encounter” (in Spanish, encuentro). The V Encuentro, and Pope Francis’s entire pontificate proclaim the “New Evangelization,” connecting our “encounter” with Jesus to our becoming his “Spirit-filled evangelizers” and “missionary disciples.”

The V Encuentro is a movement of the Church that has embraced four large assemblies of Hispanic/Latino Catholic leaders (in 1972, 1977, 1985, and 2000, with an additional and highly successful Youth and Young Adult gathering at the University of Notre Dame in 2006). It has incorporated detailed processes of formation and follow-up before and after each event. I have been blessed to have been an enthusiastic participant in this movement since its inception in 1972. The V Encuentro, already in process, has included parish leadership development between January and July of 2017 and Diocesan Encuentro assemblies in the fall of that year. It also includes Regional Encuentros in early 2018 and a National Encuentro, in Grapevine, Texas, in the fall of this year. Continuing formation in evangelization will follow through 2020.

Why single out Hispanics/Latinos?! One reason is that our Hispanic/Latino brothers and sisters are rapidly becoming the majority of Catholics in the United States, already exceeding 40% and over 60% of those under 35. Youth and young adult ministry in our Church is so hugely Hispanic! Over 65% of Catholics in my Diocese of Austin are Latinos! Sheer numbers call us to action!

But we are also called to accompany our Hispanic/Latino brothers and sisters in solidarity with their movement in a similar way that we were all called to accompany our African-American brothers and sisters during the earlier Civil Rights Movement. This I emphasized in my address to Hispanic/Latino Church leaders in Las Vegas, Nevada, during the initial phases of the V Encuentro process. On August 28, 2013, the fiftieth anniversary of Dr. Martin Luther King’s “I Have a Dream” speech, I pointed out that the Civil Rights Movement of the 1950’s and 1960’s, clearly focused on the struggles for equality of our African-American brothers and sisters, was, in a profound sense, an inspiration for all of us in the United States to find ways, in the words of Dr. King, to “sit at the table of brotherhood.” Only in this way, together as a nation, could we be “free at last.” In fact, the V Encuentro Hispano could very well inspire an all-inclusive, e pluribus unum, new civil rights movement, led by the Spirit and fed at the best table of brotherhood and sisterhood—the Table of the Eucharist!

What characterizes the entire Encuentro movement is a passion to affirm Hispanics/Latinos as a prophetic voice (in Spanish, voz profetica) for evangelization, intercultural solidarity, community building, and healing of an increasingly polarized United States. Pope Saint John Paul II, in his talk at San Antonio’s Plaza Guadalupe in 1987, spoke of the Hispanic Heritage as “very important for the Church. Spanish was the language of the first evangelizers of this continent!” Saint John Paul went on to challenge today’s Latinos: “It is your turn to be evangelizers, of each other and of all those whose faith is weak or who have not yet given themselves to the Lord. May you be no less zealous in evangelization and in Christian service than your forebears!” Make your parish, he urged, a “family of families.”

Here where I presently serve in the Diocese of Austin, we have already experienced, in a dramatic and historic way, the power of the Hispanic/Latino voz profetica! In 1957 Latino young men introduced the CURSILLO Movement to the United States at St. Francis parish in Waco, Texas. The subsequent impact on the wider Church has been astounding! From the Cursillo came the experience of small Christian community (comunidad de base) and son and daughter movements like ACTS, Christ Renews His Parish, Teens Encounter Christ, Search, Journey to Emmaus, and the many college and university Awakenings! All of these fruits of the Latino spirit of “familia de familias,” a family of families.

The Fourth Encuentro was, in fact, an invitation extended by the national Hispanic/Latino Catholics to the entire diversity of ethnic and cultural groups that make up the whole Church, in order to mirror the “Many Faces in God’s House” at the1985 Los Angeles gathering.

What Hispanic/Latinos have always brought and continue to bring to the Church and society is the evangelizing spirit of Our Lady of Guadalupe, Mother of America. Her image has been carried by indigenous people in their struggle for freedom, by Cesar Chavez and the United Farm Workers in their struggle for labor rights, by immigrants and refugees, members of a Church, in the words of Pope Francis, “without borders”, and by pro-life advocates praying and counseling before abortion clinics in order to save children yearning to be born.

Pope John Paul, in his Apostolic Exhortation The Church in America, promulgated in that same Basilica in 1999, wrote this: “In America, the mestiza face of the Virgin of Guadalupe was from the start a symbol of the inculturation of the Gospel, of which she has been the lodestar and the guide. Through her powerful intercession, the Gospel will penetrate the hearts of the men and women of America and permeate their cultures, transforming them from within.”

Let us in the United States accompany our Hispanic/Latino brothers and sisters in making this happen!

Fr. Bruce Nieli, CSP is an evangelist and missionary based at St. Austin Church in Austin, TX. As part of the Extraordinary Jubilee Year of Mercy, he was named a Missionary of Mercy of Pope Francis. A native of Long Island, NY, Fr. Bruce was ordained in 1973. He is past director of evangelization of the United States Conference of Catholic Bishops.
Fr. Bruce leads parish missions and retreats, and speaks at a variety of diocesan and regional conferences. He is fully bilingual and does presentations in both English and Spanish. “Responding to the Spirit in the Soul, in the Church and in the World” is one of his topics, as is the spirituality of St. Paul the Apostle.