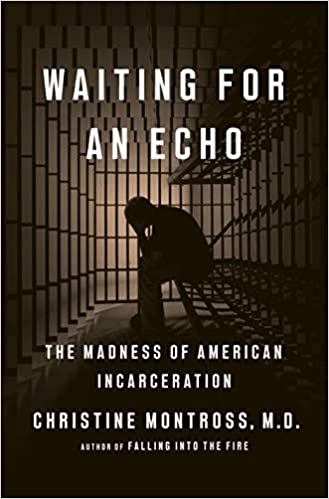 I heard an interview on public radio with Christine Montross, MD. She was talking about her book, Waiting for an Echo, which dealt with how we use prisons in the United States. Because we have developed Paulist Prison Ministries—active since 1991—my ears perked up. The interview was so compelling I had to buy her book.

Right from the beginning, she lays out her thesis: “I began to see how poorly suited the American prison system is for those with mental illness and how the system’s general practices indiscriminately shift large numbers of people who belong in therapeutic environments into punitive ones (p. 5).”

As a psychiatrist and an associate professor of psychiatry in the Warren Alpert Medical School of Brown University, she has visited prisons all over the country and has interviewed prisoners of all sorts. She presents unsettling stories of human beings whose mental and physical states have deteriorated as a result of the very system that was supposed to be “corrective” and “rehabilitating.”

One of the backdrops that Dr. Montross paints concerns the massive shift in mental health approaches that happened in the 1980s when large institutions were abandoned under the promise of smaller, more personal treatment which would be given in local communities. As a result, society stopped thinking about how to deal with mental illness in a systematic way; and thousands of people who needed treatment and support found themselves on the street.

She talks about the limitations of our approaches to punishment, especially the need to inflict harm as a way to try to control people. She brings up, for example, the practice of spanking which is still upheld in some communities: “A study that looked at fifty years of research on more than 160,000 children revealed that spanking did not increase a child’s behavioral compliance one bit in either the short or the long term. Quite the opposite, in fact. Spanking children was ‘associated with unintended detrimental outcomes.’ Kids who were spanked were no more likely to behave well, but they were more likely to exhibit antisocial behaviors and manifest mental-health problems (p. 70).”

We seldom reflect on pretrial detainees. In fact, when some cities have tried to reform the process, there came a huge backlash as outraged citizens pointed to every new crime as proof of the failure of weak-kneed reformers. Yet pretrial detention often happens for very minor offenses, and to people whose main problem is that they don’t have money to pay a fine or to get bailed out. “The psychiatric effects of pretrial detention—a period characterized by the brutal combination of helplessness and uncertainty—can also be devastating. People who have been sentenced to prison are three times more likely than the free population to commit suicide. Pretrial detainees fare far worse, taking their own lives at ten times the rate of the general adult population (p. 74).”

Among the worse direction in prison “rehabilitation” is solitary confinement which is used for a variety of behavioral difficulties prisoners have. Dr. Montross depicts in painful detail the unique kind of torture this amounts to. She even talks about a visit to one prison that was designed for universal solitary confinement—every prisoner was in solitary. This practice, which deprives human beings of the most basic social needs they have, can only produce even greater illness in prisoners. Yet prisons seem to be resorting to it more and more.

“We claim that our interest is reform, but by condemning our nation’s long-term solitary confinement we render them more afraid, more impulsive, less well adjusted, less healthy, and less able to reintegrate into our communities in safe and meaningful ways (p. 190-191).” What a paradox: the billions that we pour into our over-populated prisons (far out of proportion to any other nation in the world) actually yields us people even less equipped to live in a healthy and viable way in our society.

Many years ago, people would quip that a conservative was a “liberal that had gotten mugged.” This was when conservative politics became associated with “law and order” and “three strikes and you are out,” and “throw away the key.” The mood swept the country so much that politicians who would be considered “liberal” today supported this approach. As I heard on the radio, one of these politicians said that “minority communities were begging us to get tough because crime was so high.”

Montross’s book is an eye-opener. While there have been some movements toward prison reform in the past few years, our prisons still are far from serving the need they were designed for. People come out of prison even less prepared for the responsibilities asks of them. We have created a self-replicating system of crime.

While certainly, the answer is not to pretend that crime is not a problem, or that dangerous people should have unchecked access to public life, a large part of our American examination of conscience has to reckon with why we produce so many prisoners, why so many prisoners come from communities of the poor and minorities, what makes people in today’s life so attracted to harmful and addicting substances, and how we believers, in particular, can start holding up a vision of life that includes the joy which comes from caring for each other, living generously, and resisting despair.

This certainly is a long-time project, calling for much analysis of the social values that dominate modern American life. In the meantime, maybe we can all think about prison and how we can serve everyone better by treating crime, and its perpetrators, with less outrage and more thoughtfulness.