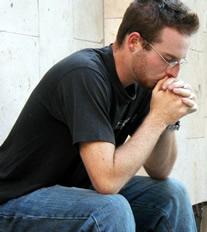 There is no more spontaneous instinct than to hit back when one is hit. Part of the impulse is protective: maybe if I hit, I can keep from being hurt further. Part of it also is revenge: to do to another exactly the harm that she or he has done to me.

Of course, the “hitting” can happen across a range of behaviors. We have children getting into fist fights, and adolescent girls texting back and forth. We have office workers sabotaging one another to see who might get a better promotion. We have drug dealers willing to kill on purpose and at random. We have nations arming themselves to the point of “mutually assured destruction.”

So it’s a vicious cycle, hitting back, because that only brings another hit. These are cycles in which we get trapped, both personally in our own lives and globally in the military games of chess that world leaders are willing to play. How many households are caught in a rhetoric that brings conversation to a standstill? The same arguments, the same recriminations, the same demeaning statements, the same puts in a room by oneself? Back and forth the barbs go. Often this leads to a total communication of anger and this, perversely, becomes the basis of a relationship. Didn’t we howl in laughter as Richard Burton and Elizabeth Taylor hurled insults at each other in “Who’s Afraid of Virginia Wolfe”? It was their very fighting that held them together and through which they expressed love. Imagine that!

We can also trace patterns of history where one evil led to another, bringing nations and continents into spirals of decline. Every killing and riot around race reminds our nation of the legacy of slavery. Will that demon ever be exorcized from the history of the United States? (Or from other societies enmeshed in the selling of human beings?) Similarly every battle between Israel and the Palestinians, Israel and other Middle East nations, harkens back to centuries of anti-Semitism which festered in almost all European countries, often with the blessing of Mother Church. All those insults, all those hurts, all those injustices, all those hits—and the back-and-forth continues as Israel tries to assert its right to exist politically and, if needed, militarily.

“Patiently” is a pregnant word.It’s not merely about patience, the way we have to put up with things and we do so with a stiff upper lip. Rather, behind the word “patient” is the idea of suffering, the Latin word pateor—which means, in its root, the ability to take the adversity that is put upon someone. Patients in hospitals are people who are suffering from illness.Almost all our suffering is unwilling: it is put upon us and we find ways to endure it. When can suffering be willingly borne? When can suffering be accepted for the sake of something else?

We are here, of course, in the heart of Christian proclamation: the death of Jesus on the Cross is his acceptance of the terrible suffering that seemingly righteous and lawful societies (Israel and Rome) felt justified in inflicting upon him.  Jesus begs that the cup of suffering be removed, but he also opens himself to drinking it if this is part of the will of his loving Father (Matt. 26:39 ff.). Jesus’ willingness to bear the suffering that would come to him because he proclaimed the coming of God’s Kingdom is exactly the “wrong” he bore “patiently.” Through his suffering he changes forever the pattern of vengeance of recrimination. “Father, forgive them. They do not know what they are doing. (Luke 23:34).”

The Cross was God’s way of exposing the fullness, and the pointlessness, of our violence toward each other; in the Resurrection, God exactly transcends this violence, opening for humankind, in Jesus’ way of life, a path to set aside, once for all, the violence and anger we direct toward each other. In the broken body of Jesus, God has unveiled the end point of human rage, of our need to hit. In the patience—in Jesus’ willingness to suffer—God would absorb this rage and bring us into a new realm of mercy: the mercy that pours into our hearts from receiving the Spirit of the risen Jesus Christ. “ . . . [T]he love of God has been poured into our hearts through the holy Spirit that has been given to us. For Christ, while we were still helpless, yet died at the appointed time for the ungodly. (Romans 5:5-6)”

To receive the mercy of God means that, in our own lives, we learn to “bear wrongs patiently.” This is our commitment to stop the cycles of recrimination—hitting back, getting even, settling the score. Because, ultimately, there is no end to this back-and-forth unless someone stops the cycle. Someone has to be willing to absorb the suffering, anger, and insult, in order for there to be a chance for something else. In order, that is, for a new space to be created, a space of reconciliation, of peace, even, perhaps, of love.

How difficult this is becomes clear when we realize how spontaneously we raise our fists or twist our faces in anger. Mercy has to defeat some of the strongest instincts inside us. It also has to defeat some of the ways we think of justice because, sadly, often justice comes to mean revenge, pain paid to another in tribute to the pain that we have received. Mercy has to be the generous step that one takes to change a situation by bearing wrongs patiently, by being willing to suffer for something greater.

Each of us has a powerful story that runs through our lives, a story of hurt and its consequences. Each of us can reflect on how such stories of hurt have structured our lives by the anger, resentment, and desire to inflict pain on others that these stories bring about. So we all know the toll that anger exacts from us; with reflection, we can also know the toll that such anger has exacted upon human history itself.

So when do we say, “Enough”? When do we acknowledge that things have gone on too long and to no avail? Only when we are willing to take it on the chin and, instead of striking back, spend time in prayer until we’ve found a way not to strike but, instead, to extend our hand in peace.

Second Spiritual Work of Mercy: To Counsel the Doubtful