“Summer reading” usually means page-turners by the beach. Perhaps I should be easier on myself because, when I read the widely-noted Religion in Human Evolution by Robert N. Bellah (Cambridge: Belknap, 2011), I found myself working pretty hard. But maybe passing on a few points in the book will benefit readers of Evangelization Exchange—either enticing you to plunge into this major work, or helping you appreciate the gist of Bellah’s thinking through shorter dips in the pool.

Religion in Human Evolutionseriously enters the discussion about the role of religion in our more secular, religious-doubting age. While it is more accessible than Charles Taylor’s A Secular Age, reading it still seems like climbing a mountain. Like Taylor, though, Bellah is staking a place for religion within modernity (and post-modernity) The benefits of this mountain-climb are multiple. 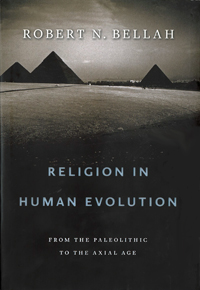 Bellah has assembled decades of his own reading, introducing his audience to thinkers in sociology and religion that do not often appear on the radar screens of pastoral agents. His argument is simple, but crucial: religion comes along with the human, and all the evolutionary patterns endorse this. One has to pull back to grasp Bellah’s arguments, but one frequently finds absolute gems again and again in his pages.

His early chapters talk about kinds of knowing—types he will weave into a story of human development. He talks about four dimensions of human knowing, the Representative, Symbolic, Conceptual, and Unitive, and we can recognize ourselves in each of these dimensions. His early chapters also talk about evolutionary patterns, debunking some naïve notions we have about genes and progress, while showing more salient evolutionary patterns. He notes, for example: “Rather, mutation takes place in phenotypes [1] organized by conserved core processes that are able to produce efficient, and often quite remarkable, changes without drastic disruption.” (64) In other words, it’s not just genes randomly mutating to produce whatever, but conserved core patterns that emerge, with mutation (change) happening around these cores. What a useful notion this is!

He notes realities that emerge from the distinctly human, namely how immature our babies are at birth, creating the solid need for parenthood different from other species. And then he builds upon this.

That parental care would lead to social bonding, the possibility of individual friendship, and even, eventually, to marriage and the family are all unforeseen, and, though in turn adaptive, have given rise to meanings that go beyond adaptation. To find the origin of love in adaptations of the earliest mammals and birds is not to reduce it to those origins but to marvel at the ways of nature in leading to something so central in our lives. (72)

From earliest pre-human and human societies emerge elements of pre-language, communication, rhythm, imitation, play, and ritual. One sees the inklings of future humanity in the seeds of this earliest hominoid behavior. Here’s another wonderful linkage Bellah makes, showing how we can grow in our awareness of “the big picture” and our connectivity to each other and the world:

But the moment when our predecessors first stepped outside episodic consciousness, looked at it and what was before, around, and would be after it, was a historic moment of the highest possible importance. Other higher mammals, although they are social, are locked each in their own consciousness…But humans, once mimetic culture had evolved, could participate in, could share, the contents of other minds. We could learn, be taught, and did not have to discover almost everything for ourselves. (130-131)

Yes, we see ourselves moving from needed repetition of action, communicated from one animal to another, toward the world of meaning, of real language, of consciousness. With those steps also come the narratives (stories) that hold us together. Another gem:

Language, therefore, involving a kind of fusion of episodic and procedural memory, necessarily gives rise to narrative. The emergence of narrative, based on language with its capacity for synergistic union of the two earlier forms of memory, is central for religion: narrative…is the basis of identity, personal and social, and religion is more than anything else a way of making sense of the world, of forming an identity in relation to the world. (102)

Bellah then sketches his main outline, the development of archaic societies in which notions of religion, order, society, and survival all played a crucial role, into axial societies. The word “axial” refers to how classical religious sociologists point to the breakthroughs that happened between 600-200 BCE across very diverse cultures: Israel, Greece, China, and India. Bellah confesses his own steep learning curve, spending years on Chinese and Indian classic writing, but the total picture was worth that steep struggle.

Axial age breakthroughs emerge from the earlier archaic patterns. He notes the move from “mythospeculation” (when artists and writers probed deeper meanings in the myths of the gods, or the implication of social expectations) to “second order thinking,” when humans thought about their own knowing, to intellectual and ethical achievements that have defined human history since their emergence. Talking about the role of the gods in the Greek city (polis), Bellah states:

What from our point of view is most interesting is that religious practice not only made possible the idea of a different social reality than the one existing, but helped to actualize it as well. Although the capacity to imagine alterative social realities is part of what we have described as the axial transition, it is interesting that in this case it does not involve anything theoretical. . . . Of course the Greeks did…write theory, though not much in the way of democratic theory. But theory, too, as well as democratic reform, arose from indispensable mimetic and narrative foundations. (352)

None of us can get away from ritual and oral tradition; these make us what we are as humans. These ritual and oral traditions are not only the ground of religion, but the ground of human experience itself: “Finally, if literacy and money seem to be closely correlated with the rise of the polis, so is monumental temple architecture, the very symbol of the solidarity of the polis.” (371)

As Bellah leads his readers from our relatively familiar Hebrew and Greek roots to the less-known and less-appreciated Chinese and Indian cultures, he underlines the essential contribution these four ancient cultures, each in their own way, have contributed to human self-understanding. Each of them attains a universal ethic, whereby one cares for the other—and all others—not for our own sakes, and a universal scope of meaning, whereby humans try to replicate in our meaning-system all that we can know of experience and the universe.

If some of these quotes and ideas sound puzzling, look at them as teasers. Bellah’s work is no leisurely reading, but it’s a workout that many will benefit from.

[1] A phenotype is the composite of an organism’s observable traits, as they arise from the dominant genes and the interaction of those genes with the environment.