Dialogue and Catholic identity was at the heart of Georgetown University’s October 11-12 conference celebrating Vatican II After Fifty Years.

“Only in the mid-20th century did dialogue emerge as an acceptable form of religious discourse,” said Fr. Joseph O’Malley, SJ, in his keynote address. “After World War II, the cultural imperialism of Western nations was at an end. Christian missionaries realized they had to divest themselves of their cultural prejudices. Religious pluralism had become a fact of life. People rubbed elbows with Jews and Muslims on a daily basis. Was it really true that there was no salvation outside the church?” 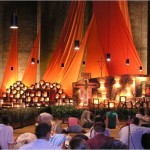 O’Malley, the author of What Happened at Vatican II,  observed how in the Council’s Dogmatic Constitution on the Church (Lumen Gentium), the style avoided words of alienation and condemnation. The church was developing a new language: friendship, brotherhood, sisterhood, conscience, the dignity of every person, collegiality, reconciliation, and mutuality. “Dialogue is the word that captures their spirit. Vatican II represents a language reversal—from monologue to dialogue—in the history of the church,” he said.

In “The Church in the Modern World” (Gaudium et Spes), O’Malley observed, the church’s relation with the world is described as a dialogue—a cultural dialogue on a mega scale. “But dialogue does not exhaust the meaning of the Council. Dialogue and proclamation must be taken together. The church’s inclusion of dialogue, however, signals a significant shift in mindset–from threats to persuasion, from exclusion to inclusion, from suspicion to trust, from intransigence to seeking common ground, from alienation to recognition, from monologue to dialogue.”

Another of the speakers, Dr. Catherine Clifford of St. Paul University in Ottawa, Ontario, reminded listeners in her talk “Catholic and Irrevocably Ecumenical” that unity belongs to the very identity of Christ’s Church, and that the Council calls every member of the Roman Catholic Church to work and pray for restoration of full unity among the followers of Jesus. Pope John XXIII considered unity the ultimate aim of the Council.

Dr. Clifford described the language of the Council as a subtle shift away from the narrow and exclusive identification of the Roman Catholic Church and the Church of Christ. “The experience of dialogue,” she reflected, “gives rise to a deeper understanding of the one church, as well as of each particular church’s contribution to it with its own unique spirituality, theological emphases and practices.”

She noted how the French priest Paul Couturier, who in the 1930s helped shape the Week of Prayer for Christian Unity, invited Christians to pray together rather than for each other’s conversion. He invited people to pray for unity “as Christ wills it and when he wills it.” Couturier’s vision was not centered on Catholicism or a single confessional church, but on Christ so that each of the churches would become more fully “church”.

On the topic of dialogue and ecclesial identity, Clifford observed how, when Paul VI succeeded John XXIII, he brought a heightened consciousness that the identity of the church must include the dissonance between the church’s self-identity and it’s identity in the eyes of the world in its divided state.

“Ecclesial identity is not a fixed reality,” said Clifford, “but a dynamic reality.” As developed in his 1964 encyclical Ecclesial Suam, Paul VI saw the church’s dialogue with the modern world as critical if the church is to fulfill its mission. It can’t be indifferent to the world, but must come closer to it. Dialogue is to become the fundamental disposition that underpins every aspect of the church’s life and mission. “There’s scarcely a page in the Council documents in which ‘dialogue’ does not appear.”

It is to be a hallmark of the church’s relations both within and beyond the church. Clifford noted that “Vatican II embraced this principle of dialogue in its Decree on Religious Liberty which affirms the right of very person to follow the dictates of conscience, while also requiring us to seek the truth. Dialogue is a common search for the truth.”

The exchange involved in dialogue reveals the inner nature of the church which reflects God’s dialogue with the world. “The Church is called to be a sacrament, a sign of unity for the whole human community. We have to live that not only among ourselves within our own church but amongst all churches,” she said.

“We would do a great disservice to seminarians today if we did not prepare them to be agents of dialogue, “said Dr. Clifford. A deep commitment to ecumenism must inspire them to work for the ongoing renewal of the Catholic church. They must become themselves instruments of dialogue and reconciliation. The way we live together and love one another is the only effective way we have to ‘be church’ today, to proclaim the gospel.”