Having celebrated another Week of Prayer for Christianity last month, what is there to fuel our hope that it wasn’t all just an exercise in futility? What’s to celebrate?

Signals are there that this movement called “ecumenical” does in fact move, that an increasing degree of “life together” is shaping our perception of the future in positive ways.

One noteworthy sign of this was the statement by the North American Orthodox-Catholic Theological Consultation last October. For the past forty-five years they have been sifting through the pastoral and doctrinal issues that historically have prevented our churches from sharing a single life of faith, sacraments and witness before the world. But in this document, as indicated by its title, they are getting down to brass tacks: “Steps Towards A Reunited Church: A Sketch of an Orthodox-Catholic Vision for the Future.”

Their listing of what we share is substantive and long. The short version: We believe our life as churches to be centered on the Divine Liturgy, the Word of God, and the sacraments from baptism to marriage. Both churches recognize each other’s bishops as legitimately ordained into the apostolic succession. Both venerate Mary, the Mother of God, and a whole range of holy men and women from every age, many of them common to both our traditions. Both our churches cherish ancient practices that help the faithful grow in holiness, such as reverencing sacred images, fasting, the monastic life, and various forms of contemplative prayer. 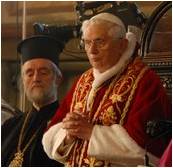 All of which pushes the commission members to state: “It is urgent that Orthodox and Catholic Christians find an effective way to realize our common tradition of faith together, and to present the world with a unified testimony to the Lordship of Jesus. To be what we are called to be, we need each other…. To become what we are…we cannot stop short of re-establishing full Eucharistic communion among ourselves.”

After 950 years of division between us, the language is now that “it is urgent” to put an end to this. One might say that, thanks to prayer, local action, and the work of commissions like this, there’s been a sea change.

Consultation members do not shy from addressing the hard issues head-on and recognize that this cannot be achieved without “new, better harmonized structures of leadership on both sides: new conceptions of both synodality and primacy in the universal Church, new approaches to the way authority and primacy are exercised in both our communions.”

At the heart of our differences, they note, is the way each of our traditions understands the proper exercise of the primacy in the leadership of the Church, not only within Christianity as a whole but also within the various regions of the Christian world. In the Christian East, “primacy” has a less supra-national character than it has acquired in the Latin Church. The underlying pattern among the Eastern churches was what is called “autocephaly”—ecclesiastical independence correlative to the emerging nation-state, with the head of the church in a given nation (the patriarch) seen as exercising primacy.

What is encouraging about the Consultation’s statement is that they have reached the stage where they are imagining in concrete terms what it would look like to be in full communion with one another. Some of their observations and imaginings:

The bishop of Rome’s “relationship to the Eastern Churches and their bishops would have to be substantially different from the relationship now accepted in the Latin Church…. The leadership of the pope would always be realized by way of a serious and practical commitment to synodality and collegiality.”

The bishop of Rome would be seen as a member as well as head of the college of bishops, the senior patriarch among the primates of the churches. His fundamental worldwide ministry would be to promote the communion of all the local churches. 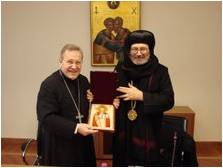 There would also be some implications for the way the Roman curia presently functions. Its relationship to local bishops and Episcopal conferences in the Latin Church “would become less centralized: bishops, for instance, would have more control over the agenda and the final documents of synods, and the selection of bishops would again normally become a local process.”

The reader will sense some give-and-take here on both sides, but the end result would truly be a cause for celebration all-around: “The Pope and the Orthodox Primates could invite all the faithful under their jurisdiction to recognize each other’s Churches as ‘sister Churches’ that fully realize the Apostolic faith in doctrine, sacraments, and ecclesial life, despite the historically different forms in which our liturgy is celebrated, our doctrine taught, and our community life structured.”

The fact that consultation members have reached the stage where they are concretely imagining it means that full communion between the Latin, Eastern Catholic and Eastern Orthodox Churches is closer than it has ever been before. That is ample reason for us to join our hearts and voices to those around the world in the January 18-25 Week of Prayer for Christian Unity and throughout the year.