The Lights of Christmas

That theme of light in the darkness is at the heart not only of the feast of the nativity of Jesus but of the determination of the date as well. The primitive church seems to have had little interest in the date or circumstances of Jesus’ birth. The community’s expectation of an immediate consummation of history and a final coming of Christ took priority.

They celebrated the mystery of Christ’s resurrection weekly in their Eucharistic gathering and annually in the Triduum or Three Great Days of Holy Week. But eventually, the church’s desire to live out liturgically the entire Christ mystery led to the Nativity festival.

We do not know the actual date of Christ’s birth. It was not recorded in the gospels, nor is there any early tradition to identify it. The earliest record is of a Nativity festival in Rome in 336. Why did they chose December 25 as the date?  Theories are based on three tendencies of the early Christians: a respect for symbolism; a tendency to borrow from the world around them, both natural and cultural; and a desire to offset the influence of pagan festivals.

There was at the time a pagan sun cult—Mithraism—popular in the Roman Empire. Devotees of Mithra, a Persian deity, celebrated the birthday of their sun god with a festival called Solus Invicti (Latin: the unconquered sun) at the winter solstice. The cult of the Sun god, proclaimed as the principal divine patron of the Roman Empire by Emperor Aurelian in 274, became a threat to Christianity.

One theory is that the natural symbolism of the sun overcoming the darkness was not lost upon the Christians. The gospel of John speaks of Jesus as a light for all people, “a light that shines in the darkness and the darkness did not overcome it.”

Christians in the northern hemisphere could not help but note that each year, beginning with the Fall equinox, the darkness began to grow as the nights lengthened and the days shortened. But at the winter solstice, the light of day began once again to conquer the darkness of night.

In the calendar in use at the time, the Julian calendar, the winter solstice occurred on December 25. The adoption  of this day for the birthday of Jesus would have challenged people to turn from the adoration of the material sun to the adoration of the “sun of justice,” Christ the Lord, the light of all nations. And thus did December 25 become the popular date for Christmas.

It was never intended to be the literal memorial anniversary of a historical event, but rather a liturgical observance of a saving event. When the emperor Constantine himself became Christian, his Edict of Milan in 313 provided protection and support for the church community which already had in place its Nativity date of December 25th. The rest, as they say, is history.

If there is any time of the year that we might call a time of lights, it is surely now. Lights on shrubs, trees, railings and houses cause us to “oohh” and “aahh” and warm our hearts. If seen aright, they are but faint reminders of the divine person who came into the darkness of our world to dwell among us as one of us. 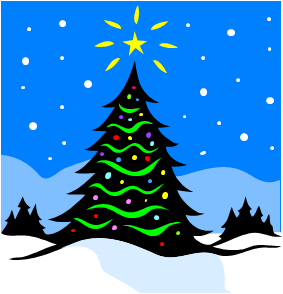 As the evangelist John writes, “In him was life” and “from his fullness we have all received.”  Through him, we become children of God. Through this birth we ourselves are rebirthed into divine life itself. Through the light of the Word made flesh, God is present to us in a whole new way.

That is the meaning behind all the lights and the gifts and the gatherings. Celebrate it with a joyful heart!