When my air conditioning system broke a few weeks ago, I looked up the number to schedule an appointment and remembered a very good and honest repair man who had fixed my furnace a couple of years ago. “He is Hispanic so I’ll make the point to ask him about his faith and see where the Lord takes the conversation,” I thought to myself.

He arrived promptly that same evening, accompanied by his two children, ages seven and three. His wife came also but waited in the truck. I thought it seemed strange for the entire family to be present, but it is not my style to push people, so I let it be. Everything went great and he fixed my AC system in less than an hour. “It is going to take at least two hours to get all the heat vapors out of the house and get it to the right temperature,” he said. “That’s alright, I will be patient,” I replied.

So we sat at the dining room table and waited. He found a picture of me in a group with my former sister in the religious community–habit, veil and lots of smiles. He picked it up and asked, “So Maggie, what do you do now?” “I work for the Catholic Church,” I said proudly! “I still have the same job,” I added with a smile.

Then he asked if he could look at my books, noting “You have so many books about the faith!” I said, “Sure, are you looking for something in particular?” No answer followed. So I waited and prepared to listen: is it a crisis of faith, agnostic, what? I even became a bit anxious. “Carlos, you work out there in the world, can you tell me, are people hopeful, you know, your friends, are Hispanics losing the faith with the political situation?” Then the ‘preaching’ began. His first phrase was “people don’t like to hear anybody calling them to conversion. This is the main problem nowadays.” Then it hit me: “Oh, I seem to have a separated brother in my home.”

Then he gave me his version of the kerygma: “God wants everyone to be saved by accepting Jesus as their Savior. God wants us to love him with all our heart, soul, mind and strength and our neighbor as ourselves. God is a jealous God, a purifying fire, who did not hesitate to demand the slaughter of whole tribes and even their flocks to help Israel remain faithful,” etc.

I was thrilled, following his exposition of the good news, giving him the book and the chapter as he spoke. “Today I will learn new ways to respect other Christians,” I thought, but no! He was preparing his attack on our Catholic practice of priestly celibacy. Why? Really, what triggered such an attitude? 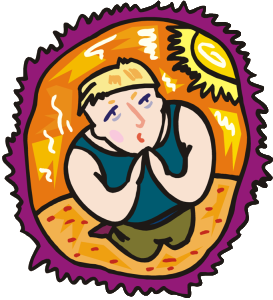 “Carlos, you are quoting now from ABC, Fox and Univision, you are quoting the news! Have you ever seen the Baptist Church, the Adventist, the Pentecostals attacked in the News? No! Have you ever wondered why? They attack the Church with its prohibitions about premarital sex, abortion, contraception, in vitro fertilization, cloning, precipitated wars, capital punishment, the abuse of the poor and the weak. Those are the main reasons that make us unpopular and the target of media coverage. It is popular to take a shot at us. Like in the World Cup, we are the team to beat! Can’t you see that?”

At the end, I still cared for Carlos and his kids, his zeal, so I asked him to consider one question: “From all the topics in the Bible, why did you pick one that you knew we would not agree on? Would you be willing to do that next time you come?” But I was not proud to see how fast my annoyance thermostat rose.

Has anybody had a similar experience? How do you handle situations like this and remain a caring evangelizer?

Here is a list of high heated topics, misconceptions that people have about the Catholic Church. You may want to add a few more: