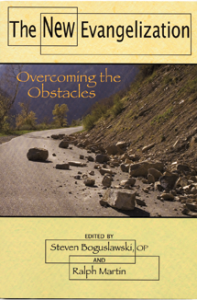 In effect, this book challenges us to re-situate our contemporary modern thinking by asking whether (Western) Catholicism has become too inclusivistic, too universal, too comfortable, too myopic, and too resistant to “Southern” (or pre-modern) forms of Christianity. Do we simply presume that most people are going to be saved? For that matter, do we even think that salvation is an issue? Avery Dulles raises issues about the near disappearance of limbo, and Ralph Martin goes even further by raising the issue of hell. If there are no consequences to the way we live, where would any motive for change come from?

John Neuhaus suggests that we’ve become universalists, while Francis George reviews how, in our society, faith/culture issues reduce themselves to church/state issues, the forum where state is slowly diminishing the liberty of churches because of its commitment to mainly individual rights.  Francis Martin joins Philip Jenkins in bringing up our discomfort with charismatic manifestations of Catholicism. Jenkins makes the point that John Allen has been making, namely that Catholicism is now fundamentally a “Southern” faith, in Latin America and Africa, where it lives through popular religious devotions and extraordinary signs (like miracles). Bob Rivers reprises the points in his widely-read book, From Maintenance to Mission, asking where the mission orientation has gone in our parishes.

In what strikes me as the most pointed and blunt chapter, Mark Montminy, a priest in Manchester, New Hampshire, captures just how inward-looking and comfortable we have grown in our American parishes. “In recent years priests have been ‘brainwashed’ into thinking that we are an overworked and aging group and that we have nothing left to do but to maintain the status quo and wait for some miracle to happen.” He indicates how we have squeezed passion from parish life. He, as they say, “tells it as it is.” This chapter by itself should be reproduced and sent to every priest and deacon.

Edwin Hernandez and his co-researchers present a handy overview of the Latino church in the US, noting that indeed many Hispanics do leave the Catholic Church and find community, religious intensity, ministry and social outreach in other Christian denominations. Sometimes this is precisely a reaction to an accommodated Catholicism in favor of an experience more Hispanic, more personal and less modern. Still, 70% of Latinos are Catholic and as involved in Church as their non-Latino counterparts.

This book lays out the obstacles—universalism, a lack of intensity, an absence of mission focus, a denial of the reality of judgment, an overly comfortable accommodation to modernity—but it does not draw a road map toward a solution. On the one hand, simply rejecting the accomplishments of modernity and reverting to pre-modern patterns (as if we could become Africans) is not viable. On the other hand, simply mouthing the blandness of modernity (everyone’s good or trying to be good, while God, if there is one, is nice) is emptying faith of its power.

The book looks, in fact, toward a longer, yet-to-happen project: accepting modernity but finding in it, and exposing from within it, pointers to transcendence, to God and to our need for salvation in Christ, and, at the same time, opening up the opportunities for conversion, genuine service, relationship and personal religious expression that abound in today’s Catholic life. It may be that in 25 years most American Catholics will have Latino backgrounds. This, however, does not mean they will not be modern, with the assumptions of modernity. We have yet, in the end, to call today’s Catholics to discipleship, in the concrete reality of their modern lives. Evangelization may be our only real way to do that.