Bloody Sunday and the Importance of Saying “Sorry”

In June the British government finally confronted its responsibilities to civil society and the rule of law by addressing one of the darkest moments of the Northern Ireland Troubles. It condemned the killing by British soldiers of innocent Irish civilians engaged in a protest march against internment-without-trial on the streets of Derry in 1972 in an event known as Bloody Sunday.

British Prime Minister David Cameron formally apologized in the House of Commons for the unjustified and unjustifiable killing of 14 civilians, saying ““What happened should never, ever have happened. The government is ultimately responsible for the conduct of the armed forces. And for that, on behalf of the government, indeed on behalf of our country, I am deeply sorry.””

I was in Northern Ireland at the time, co-leading a group from the United States and Canada on a Reconciliation and Unity study pilgrimage organized by the Paulist national offices for Reconciliation and for Ecumenical and Interfaith Relations. The events in Derry gave us a clear lesson on what may seem like a fairly basic truth in human relationships: the importance of saying “sorry”. The British prime minister’s apology provided the people of Northern Ireland with absolute clarity concerning a divisive and traumatic event, along with an opportunity for reconciliation.

Northern Ireland was for many years the site of a violent and bitter ethno-political conflict—the Troubles—between those claiming to represent nationalists, who are predominantly Roman Catholic, and those claiming to represent unionists, who are predominantly Protestant. Unionists want Northern Ireland to remain part of the United Kingdom, while nationalists wish it to be politically reunited with the rest of Ireland.

The day after the apology, our group was in the city where Bloody Sunday events took place and whose very name reflects this contentious history. It is known as Derry by Irish nationalists/republicans but called Londonderry by unionists/ loyalists. Clearly, it was a great healing moment in Irish history. “I simply cried,” said our guide, who works for the Peace and Reconciliation Center in Derry, and who had been among the huge crowd in the city square the day before.

“It was a rare sight to see 10,000 Irish republicans gathered in a public square cheering a statement of the prime minister of Britain as he appeared on a large screen in a live link from the House of Commons in London. The slogan, their plea,” she said, “was on T-shirts and banners all over the city: ‘Set the Truth Free’.”

Cameron’s statement did just that, and his words were perceived as generous and unambiguous, and left a big impression on the families of the victims. After 38 years, the innocence of the dead and injured on Bloody Sunday was officially known to the world.

Within 11 weeks after Bloody Sunday, a report was issued by a British government commission under the direction of Lord Widgery. The Widgery Report was salt in the wound for Irish republicans because it cleared the British army of culpability and cast serious doubt over the innocence of the victims. It was perceived as a whitewash.

Prime minister Cameron’s apology was based on a new, monumental report of 5,000 pages compiled over the past twelve years by Lord Saville at the cost of 192 million pounds. “The Widgery Tribunal findings have been laid aside,” Cameron said. “Not many states in the world would do that and we should see it as a sign of strength that we have done it.”

The writer George Bernard Shaw once remarked that “Truth telling is not compatible with the defence of the realm,” but the new, Saville Report proved otherwise. It accused the British soldiers of ill-discipline, of lying, of contravening the rules for using weapons, of killing when they were under no threat, and of not issuing any warnings before firing. As one Derry citizen said, “Today is a day when the truth has won out.”

Church leaders were quick to seize upon this healing moment. Local Church of Ireland (Anglican) Bishop of Derry, Dr. Ken Good, said that this was a time “to show that we have the desire and the will to deal courageously and humbly with issues that have long been painful and contentious.” This came as good advice, not only for events of national import such as this, but for long-held personal grievances as well. 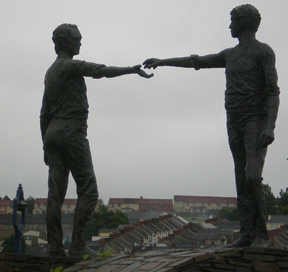 An unprecedented meeting between leaders of the three main Protestant churches in Ireland –Presbyterian, Methodist, and Church of Ireland–and the families of those who died on Bloody Sunday took place in Derry while we were there. They recognized that the ways in which people on different sides of the community have viewed the events of Bloody Sunday and have interpreted their significance, has been a source of pain and tension over the past three decades, but that this report “now presents us with the possibility of some healing of those differences.” The three church leaders made a presentation to the families of a replica of a Hands Across the Divide sculpture which stands near a bridge at the west end of the city, depicting two men reaching out their hands to one another.

“We can do more together than we can apart,” said retired Catholic Bishop of Derry Edward Daly. “We all have a love for this city—whatever we call it, Londonderry or Derry—and we don’t want there to be a divide.”

Facing the truth and offering sincere apology are important steps on the road to reconciliation. Do those realities find expression in our own lives and relationships?